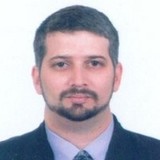 Show Academic Trajectory
Ego Network
D-Core
Research Interests
Author Statistics
Experience
Sign in to view more
Education
Sign in to view more
Bio
His career in wireless communications has spanned over 20 years, during which time he has been involved in the development and deployment of various wireless standards, including AMPS, IS-54, GSM, IS-95/CDMA 2000, UMTS, EVDO, WiMax/802.16, and LTE/LTE-A. He joined Huawei’s North America Research Center in 2005, where he led a research team developing radio resource management algorithms for fourth generation wireless communication systems. He is currently a Principle Engineer, conducting research into next generation wireless technologies and participating in the standardization of LTE-advanced. One of his various activities is to represent Huawei as a delegate to different 3GPP RAN working groups. Before joining Huawei, he spent over ten years with Nortel Networks, where he held a number of positions in engineering, product development/integration, and product management. He has eight issued and several pending patents, and has published many technical articles. His current research interests include: device-to-device communications, next generation wireless system architecture, and wireless resource management.