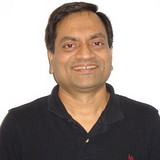 Dubey previously worked at Intel from 1984 to 1991. Before rejoining the company in 2003, he had served as a research staff member at IBM’s T.J. Watson Research Center from 1991 to 2001. While there, he was one of the principal architects of the AltiVec multimedia extension to the Power PC architecture.

Throughout his career, Dubey has made significant contributions to the design, architecture and application performance of various microprocessors, including the IBM Power PC, the Intel386™, Intel486™, Intel® Pentium®, and Intel Xeon® processors.

He holds 36 patents and has published more than 100 peer-reviewed technical papers. In 2012, Dubey was honored with an Intel Achievement Award for breakthroughs in parallel computing research, and was honored with Outstanding Electrical and Computer Engineer Award from Purdue University in 2014.