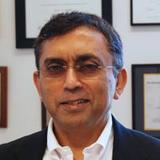 Experience
Sign in to view more
Education
Sign in to view more
Bio
Ajit Varki received basic training in physiology, medicine, biology, and biochemistry at The Christian Medical College, Vellore, The University of Nebraska, and Washington University in St. Louis. He also has formal training and certification in internal medicine, hematology, and oncology. He is currently a Distinguished Professor in the departments of Medicine and of Cellular and Molecular Medicine. He is the Founding Director of the Glycobiology Research and Training Center at UCSD and the Executive Editor of the textbook Essentials of Glycobiology. He is also currently the Executive Co-Director for the UCSD/Salk Center for Academic Research and Training in Anthropogeny, as well as an Adjunct Professor at the Salk Institute for Biological Studies. Dr. Varki is an elected member of; American Academy of Arts and Sciences, National Academy of Medicine, American Society for Clinical Investigation, Association of American Physicians, and Sigma Xi. Dr. Varki was a recipient of a MERIT award from the NIH, the American Cancer Society Faculty Research Award, and three of the highest honors in the field: the Karl Meyer Award (2005), the International Glycoconjugate Organization (IGO) Award (2007), and the Rosalind Kornfeld Award for Lifetime Achievement in Glycobiology (2020). He is also recognized for creating the first major open access research journal (JCI, 1996) as well as the first major open access textbook (Essentials of Glycobiology, 2008). He is a Specialist Advisor to the Human Gene Nomenclature Committee and the Vertebrate Gene Nomenclature Committee. He was honored with the Old Cottonian of Eminence Award at the 150th Anniversary of Bishop Cotton Boy's School, Bangalore, India in 2015. He was also honored with the Annual Research Day Distinguished Faculty Medal and Oration at his medical school alma mater, the Christian Medical College, Vellore.
Research Interests