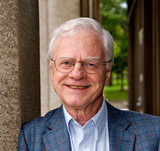 Show Academic Trajectory
Ego Network
D-Core
Research Interests
Author Statistics
Experience
Sign in to view more
Education
Sign in to view more
Bio
Professor Anderson developed a theory for bond stretching force constants in molecules and solids as a graduate student under R. G. Parr. During his postdoctoral year with H. Shull he extended his applications and understanding of this electron densitybased theory. This effort continued into his postdoctoral stays with Harrison Shull and Roald Hoffmann, culminating in his atom superposition and electron delocalization theory for bonding (based on the Hellmann-Feynman electrostatic theory for molecular forces). He discovered that a one-electron molecular orbital energy as given by extended Huckel-type hamiltonians approximated well the attractive energy due to charge redistribution accompanying bond formation. The repulsive component, due to the first step of superimposing rigid atoms, contains the information used in his theory for force constants. Professor Anderson and his coworkers at Case have used the ASED-MO theory to gain an understanding of structures and reactions and electronic and vibrational properties in the fields of catalysis, solid state and surface chemistry and electrochemistry. The properties of doped diamond were also studied using the ASEDMO theory.