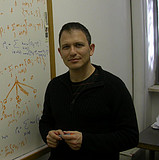 Experience
Sign in to view more
Education
Sign in to view more
Bio
His research interests include machine learning, graphical models, convex optimization, neural computation and natural language processing. He is an action editor for the Journal of Machine Learning Research, and the Associate Editor in Chief for the IEEE Transactions on Pattern Analysis and Machine Intelligence. His work has received several prizes including five paper awards (two at NIPS, two at UAI, and one at ICML), as well as one runner up for best paper at ICML. His work has been supported by several grants and awards from ISF, BSF, GIF, Intel, HP, and Google.
Research Interests