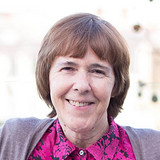 Experience
Sign in to view more
Education
Sign in to view more
Bio
Anne Dell is one of Britain’s leading scientists. As Professor of Carbo-Hydrate Biochemistry at Imperial College, London, she specialises in the role sugars play in the body, seeking to answer biological questions such as “How do pathogens infect cells?” and “Why are developing foetuses not rejected as "foreign" by their mothers?” Anne’s laboratory is a centre of excellence, working with scientists around the world to define the biological roles that glycans (sugar polymers) play in health and disease. Anne was the youngest of seven children, brought up in the Australian outback, and taught by her mother at home via Correspondence School lessons until the age of 11. She took a chemistry degree at the University of Western Australia, and came to the UK to carry out her PhD at the University of Cambridge, before joining Imperial College. Anne was elected to the Fellowship of the Royal Society in 2002 and was awarded a CBE in recognition of her services to science in 2009. Other honours include election to Fellowship of the Academy of Medical Sciences and Membership of the European Academy of Science. She has Honorary Doctorates from the University of Western Australia and the University of Waterloo in Canada. She has a daughter, who was born in 1984.
Research Interests