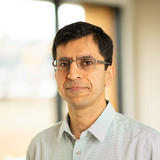 Show Academic Trajectory
Ego Network
D-Core
Research Interests
Author Statistics
Experience
Sign in to view more
Education
Sign in to view more
Bio
At the Allen Institute for Artificial Intelligence (AI2), I work on scalable and robust methods for Question Answering, while exploring new avenues in probabilistic inference, graphical models, combinatorial reasoning, and discrete optimization. A primary focus of my research is to push the boundaries of inference techniques to help solve core challenges in machine intelligence, particularly involving NLP and Math, in the context of two projects at AI2: Aristo and Euclid. Prior to joining AI2 in mid-2014, I spent over three years at IBM Watson at the Business Analytics and Math Sciences department, transitioning into Smarter Energy Systems and Cognitive Algorithms over the years. During 2005-2010, I was at Cornell University, working closely with Profs. Carla Gomes and Bart Selman at the Intelligent Information Systems Institute (IISI) and the Institute for Computational Sustainability. I spent several years in Seattle as a Ph.D. student at the University of Washington (advised by Profs. Paul Beame and Henry Kautz), after graduating from the Indian Institute of Technology (IIT Kanpur) advised in part by Prof. Manindra Agrawal and Somnath Biswas.