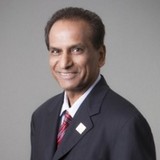 Show Academic Trajectory
Ego Network
D-Core
Research Interests
Author Statistics
Experience
Sign in to view more
Education
Sign in to view more
Bio
Dr. Raghavendra is a Professor of Electrical Engineering and Computer Science and is Senior Associate Dean for Strategic Initiatives for the Viterbi School of Engineering at the University of Southern California , Los Angeles. He was Chairman of EE-Systems Department from 2003-2005 and Senior Associate Dean for Academic Affairs during 2005-2006. Previously, he was a faculty in the Department of Electrical Engineering-Systems at USC from 1982-1992, as Boeing Chair Professor of Computer Engineering in the School of Electrical Engineering and Computer Science at the Washington State University in Pullman, from 1992-1997, and with The Aerospace Corporation from August 1997-2001. He received the B.Sc (Hons) physics degree from Bangalore University in 1973, the B.E and M.E degrees in Electronics and Communication from Indian Institute of Science, Bangalore in 1976 and 1978 respectively. He received the Ph.D degree in Computer Science from the University of California at Los Angeles in 1982. Dr. Raghavendra is a recipient of the Presidential Young Investigator Award for 1985 and is a Fellow of the IEEE. His research intersts are Computer Networks, Wireless and Sensor Networks, parallel and distributed computing.