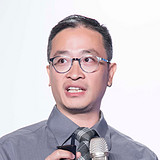 Recognized as an ACM Distinguished Scientist and elected into the CHI Academy, he recently received a 20-year Test of Time award for research in information visualization. He has been featured and quoted in the press, including the Economist, Time Magazine, LA Times, and the Associated Press. An avid swimmer, photographer and snowboarder in his spare time, he also has a blackbelt in Taekwondo.