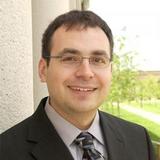 I studied Java security, which included spending two cool summers working at Netscape and, among other things, helping design their Java security architecture, which has since influenced the Java2 architecture as well as Microsoft's C# system.

In my life outside the computer science building, I've tried all kinds of hobbies over the years, but I seem to have settled into swing dancing as my favorite thing.

I did my undergrad work at UC Berkeley, where I was a member of the Computer Science Undergraduate Association, which has quite an interesting on-and-offline social scene. Check out this paper by Tara Bloyd for some amusing details. I also spent a year living in Bowles Hall, a beautiful dorm built in 1929, directly atop the Hayward Fault. Rumble.

I went to high school at J. J. Pearce High School in Richardson, Texas. Brian Eisemann once maintained a fantastic alumni address book, but he graduated from college and it went away, although you can look at an archived copy from 2001. J. J. Pearce, itself, used to maintain another address book, but that died as well. Here's an archived copy from 2002. These days, there are about as many people in Facebook from my high school class as there ever were on those other resources. It's still a tiny fraction of our class - not like kids today, who do this stuff automatically.