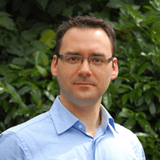 Max-Planck-Institut für Kohlenforschung
关注
立即认领
分享
基本信息
浏览量：183
个人简介
Dr. Dimitrios A. Pantazis studied Chemistry at the Aristotle University of Thessaloniki, with an honors research program in Quantum Chemistry. He obtained his PhD in Computational Chemistry from the University of York with John McGrady (now in Oxford). Following an EPSRC postdoctoral fellowship at the University of Glasgow, in 2007 he joined the group of Frank Neese in Bonn. He was awarded the 2010 Ernst-Haage Prize for Bioinorganic Chemistry. In 2011 he became a group leader at the MPI for Chemical Energy Conversion, establishing a research group devoted to the study of biological water oxidation. In 2015 he accepted a permanent position as head of EPR Theory, leading various research programs related to all aspects of biological and artificial photosynthesis. Since 2018 the group is based at the MPI für Kohlenforschung. He is a founding member of the Quantum Bio-Inorganic Chemistry Society.
研究兴趣