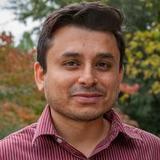 Show Academic Trajectory
Ego Network
D-Core
Research Interests
Author Statistics
Experience
Sign in to view more
Education
Sign in to view more
Bio
Prashant Doshi, associate professor of computer science, is recognized as an expert on a novel computational framework for decision-making in situations with multiple other unknown agents. Called the interactive partially observable Markov decision process (or I-POMDP), the framework combines aspects of game and decision theories. It fills an important gap in computer science about how to control agents in multi-agent settings. Prashant developed novel algorithms enabling its mainstream recognition as an expressive and normative computational theory for modeling the processes that drive individual decision making. I-POMDP was recently used by researchers at the Lawrence Livermore National Laboratory to model the problem of terrorism-related money laundering, and by researchers in the Air Force to identify trust levels of agents with hidden agendas. Not only has Prashant made original contributions to both modeling and decision-making but also to the development of efficient solutions.