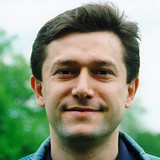 Experience
Sign in to view more
Education
Sign in to view more
Bio
Željko Ivezić (pronounced something like Gel-co Eva-zich) obtained undergraduate degrees in mechanical engineering and physics from the University of Zagreb, Croatia, in 1990 and 1991. He obtained Ph.D. in physics from the University of Kentucky in 1995, where he worked on dust radiative transfer models and wrote the code Dusty. He moved on to Princeton University in 1997 to work on the Sloan Digital Sky Survey, and took a professorship at the University of Washington, Seattle, in 2004. Željko’s scientific interests are in detection, analysis and interpretation of electromagnetic radiation from astronomical sources. His current obsession is the Large Synoptic Survey Telescope project, for which he serves as the Project Scientist.
Research Interests