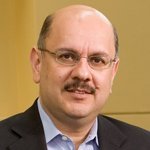 Show Academic Trajectory
Ego Network
D-Core
Research Interests
Author Statistics
ACM_Citations
Experience
Sign in to view more
Education
Sign in to view more
Bio
Farnam Jahanian serves as Provost and Chief Academic Officer at Carnegie Mellon University. Jahanian has broad responsibility for leading CMU's colleges, institutes and campuses and is instrumental in long-range institutional planning and implementation. Prior to CMU, Jahanian led the National Science Foundation Directorate for Computer and Information Science and Engineering (CISE) from 2011 to 2014. With a budget of almost $900 million, he was responsible for directing CISE programs and initiatives. During his tenure at NSF, CISE led several administration initiatives including the National Robotics Initiative, the National Big Data Research and Development Initiative, and US Ignite. Jahanian was on the faculty at the University of Michigan from 1993 to 2014, where he was the Edward S. Davidson Collegiate Professor, and served as Chair for CSE from 2007 to 2011. Over the last two decades, he led several research projects that studied the growth and scalability of the Internet infrastructure and which ultimately transformed how cyber threats are addressed by Internet Service Providers. His work on Internet stability and scalability has been highly influential and was recognized with an ACM SIGCOMM Test of Time Award in 2008. His research on Internet infrastructure security formed the basis for Arbor Networks, which he co-founded with Rob Malan in 2001. He led the management team to raise $33 million in two rounds of funding from venture capital and strategic investors. Farnam served as Arbor's Chairman until its acquisition in 2010. The author of over 100 research papers, Jahanian serves as chair of the National Research Council’s Computer Science and Telecommunications Board (CSTB) and is on the board of Computing Research Association (CRA) and National Center for Women and Information Technology (NCWIT). Jahanian has testified before Congress on topics including cybersecurity, next generation computing and “big data”. He is a Fellow of ACM, AAAS and IEEE.