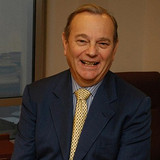 Experience
Sign in to view more
Education
Sign in to view more
Bio
Gordon Conway is an ecologist with a special interest in agricultural pest control and biotechnology. As a pioneer in the sustainable management of agricultural land, Gordon has applied his knowledge for the benefit of the developing world, having worked extensively in Borneo, Indonesia, Thailand and later in Sub-Saharan Africa. Gordon strongly believes in the role of science in policy development, and he currently heads the Agriculture for Impact initiative, funded by the Bill & Melinda Gates Foundation. This project aims to provide sustainable livelihoods for communities in Africa through intensified small-holder farming. Notably, in the past he organised the supply of bed-nets impregnated with insecticide — a contribution that has helped to dramatically reduce infant mortality in East Africa. Gordon has wide research interests, publishing books on agriculture and pollution as well as the global food crisis. In the 1990s, and in parallel to his scientific and policy work, he chaired the Runnymede Commission on British Muslims and Islamophobia.
Research Interests