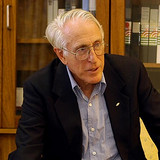 Show Academic Trajectory
Ego Network
D-Core
Research Interests
Author Statistics
Experience
Sign in to view more
Education
Sign in to view more
Bio
Graeme Clark, AC, MB, MS (Syd), PhD (Syd), FAA, FRS, (Hon) FRCS led the research from 1967 that resulted in the first clinically approved multiple-channel cochlear implant by the US FDA in 1985. It provided speech understanding in profoundly deaf people. His basic research was also crucial in establishing that this could be achieved safely (specifically, with minimal risk of meningitis). The implant thus became the first sensory-neural prosthesis to effectively bring electronic technology into functional relationship with the central nervous system and human consciousness. His research also established that it provided effective speech perception and language in profoundly deaf children—the first major advance in helping such children communicate since Sign Language of the Deaf was developed 250 years ago. He was also the first to establish the benefits of bilateral cochlear implants, and an implant in one ear and hearing aid in the other.

For his research, Clark has received numerous national and international awards and honors, including the Prime Minister’s Prize for Science and Fellow of the Australian Academy of Science, Fellow of the Royal Society London, Honorary Fellow of the Royal Society of Medicine, and Honorary Fellow of the Royal College of Surgeons. In 2007 he was awarded the Zülch Prize from the Max Planck Society, Germany’s highest award in neuroscience; in 2010 the Lister Medal, the most prestigious prize in the world for surgical science; and in 2011 the Zotterman medal from the Nobel Institute for Neurophysiology, Karolinska Institutet, Stockholm, and the CSL Howard Florey medal, Australia’s top award in medical science. In 2013 he was a co-recipient of the Lasker–De Bakey Award for Clinical Medical Research (referred to as the American Nobel).