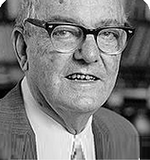 School of Computer Science Carnegie Mellon University
关注
立即认领
分享
基本信息
浏览量：1564
个人简介
Carnegie Mellon University Professor Herbert A. Simon, winner of the 1978 Nobel Prize in Economics, the A.M. Turing Award and the National Medal of Science and many other awards for his work in cognitive psychology and computer science, died on February 9, 2001, at the age of 84. Dr. Simon's research ranged from computer science to psychology, administration and economics. The thread of continuity through all of his work was his interest in human decision-making and problem-solving processes and the implications of these processes for social institutions. He made extensive use of the computer as tool for both simulating human thinking and augmenting it with artificial intelligence. Dr. Simon was widely considered to be a founder of the field of artificial intelligence.
ACM fellow 1994
研究兴趣