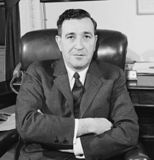 Massachusetts Institute of Technology
关注
立即认领
分享
基本信息
浏览量：30
个人简介
Born in Detroit, Mich., May 30, 1915, and raised in Dearborn, Mich., Jerome Bert Wiesner attended the University of Michigan at Ann Arbor. He received B.S. degrees in electrical engineering and mathematics in 1937, the M.S. degree in electrical engineering in 1938, and the Ph.D. degree in electrical engineering in 1950. While at the university, he was associate director of the school's radio broadcasting service and also assisted in the development of electronic techniques for use in the Speech Correction Department. In 1940, he was appointed chief engineer for the Acoustical and Record Laboratory of the Library of Congress in Washington, D.C. Wiesner joined the research staff at M.I.T.'s newly formed Radiation Laboratory in 1942, and soon became associate leader of the Radio Frequency Development Group. He later became project engineer for a key radar development program, and then leader of Project Cadillac, which was assigned the development of an airborne radar system. In 1945, he transferred to the University of California's Los Alamos, N. Mex., Laboratory, but returned to M.I.T. in 1946 as assistant professor of electrical engineering. He was advanced to associate professor in 1947 and became a full professor in 1950. From 1952 to 1961, Wiesner was director of M.I.T.'s Research Laboratory of Electronics, which grew out of the Radiation Laboratory as a multidisciplinary, interdepartmental center for broad basic research in electronics, physics, and communications. From 1959-60, he was also acting head of the Electrical Engineering Department. He assumed the post of provost in 1966. He held the faculty title of Institute Professor (M.I.T.'s highest faculty rank) from 1962 until he became president in 1971. Wiesner became the 13th president of the Massachusetts Institute of Technology, Cambridge, Mass., on July 1, 1971, after serving as a faculty member for 25 years. Wiesner “played a major role as the Institute expanded and strengthened its teaching and research programs in the health sciences, social sciences, humanities and the creative arts,” according to an MIT press release at the time of his death. Weisner was appointed to the President’s Science Advisory Committee in 1957, under President Eisenhower. And from February 1961 to February 1964 he took a leave of absence from MIT to serve President John F. Kennedy, and then, for a short time, his successor, President Lyndon B. Johnson. Wiesner later served the Congress as well, on the Technology Advisory Council of the Office of Technology Assessment from 1974 to 1981, where he was elected chairman in January 1976. He also served the Commonwealth of Massachussetts, appointed to the Massachusetts Science and Technology Board in 1970. Through his public service and service to the public from the university, Wiesner participated in the shaping of national policies and programs relating to science and technology. In particular, he took a strong stance on ending the arms race, favoring sharp reductions in military expenditure and international negotiations with a view toward effective controls and limitations on nuclear armaments as a deterrent to nuclear war. Along with colleague Dr. Kosta Tsipis, Wiesner published many of these ideas in a booklet entitled: "Beyond The Looking Glass: The United States Military in 2000 and Later." Within the scientific community, Wiesner was recognized as an authority on microwave theory, communications science and engineering, and radio and radar propagation phenomena, as well as on matters of science policy and technical education. He was a leader in the development of radar during World War II, and later in the conception of radio transmission by scatter techniques from the earth's ionosphere. The recipient of several honorary doctorates as well as a prolific author, Wiesner was a Fellow of the Institute of Electrical and Electronics Engineers and the American Academy of Arts and Sciences. He also served as a member of a number of other professional societies, including the National Academy of Engineering and the honorary engineering societies, Tau Beta Pi and Eta Kappa Nu. He was awarded the Presidential Certificate of Merit in 1948 for outstanding service to the United States. Wiesner received the 1977 IEEE Founders Medal Recipient "For leadership and service to the nation and the engineering and scientific professions in matters of technical developments, public policy and education."
研究兴趣