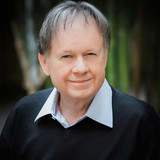 Chemistry Department Stanford University;SLAC Faculty, Stanford University
关注
立即认领
分享
关注
立即认领
分享
基本信息
浏览量：347
个人简介
Combining inorganic, biophysical and structural chemistry, Professor Keith Hodgson investigates how structure at molecular and macromolecular levels relates to function. Studies in the Hodgson lab have pioneered the use of synchrotron x-radiation to probe the electronic and structural environment of biomolecules. Recent efforts focus on the applications of x-ray diffraction, scattering and absorption spectroscopy to examine metalloproteins that are important in Earth’s biosphere, such as those that convert nitrogen to ammonia or methane to methanol. Keith O. Hodgson was born in Virginia in 1947. He studied chemistry at the University of Virginia (B.S. 1969) and University of California, Berkeley (Ph.D. 1972), with a postdoctoral year at the ETH in Zurich. He joined the Stanford Chemistry Department faculty in 1973, starting up a program of fundamental research into the use of x-rays to study chemical and biological structure that made use of the unique capabilities of the Stanford Synchrotron Radiation Lightsource (SSRL). His lab carried out pioneering x-ray absorption and x-ray crystallographic studies of proteins, laying the foundation for a new field now in broad use worldwide. In the early eighties, he began development of one of the world's first synchrotron-based structural molecular biology research and user programs, centered at SSRL. He served as SSRL Director from 1998 to 2005, and SLAC National Accelerator Laboratory (SLAC) Deputy Director (2005-2007) and Associate Laboratory Director for Photon Science (2007-2011).
研究兴趣