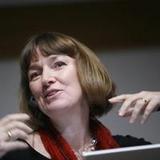 Show Academic Trajectory
Ego Network
D-Core
Research Interests
Author Statistics
Experience
Sign in to view more
Education
Sign in to view more
Bio
Kristina Höök is Professor in Human-Machine Interaction at Department of Computer and Systems Sciences, Stockholm University/KTH since 2003. She also upholds a part-time employment at SICS where she is the manager of the Interaction Laboratory. She became Associate Professor (docent) in 2002, PhD in1996, Ph Licentiate in 1991, and MSc in 1987. Kristina Höök defended her thesis on how to create an adaptive help system to help users navigate and find the most relevant information in a large on-line hypermedia manual in 1996. Her thesis works was awarded the Cor Baayen Fellowship by ERCIM (European Research Consortium for Informatics and Mathematics) in 1997. After finishing her thesis, she then continued with the problem of information overflow, but now directed at the problem of navigation through information space. She came up with the idea of social navigation, enabling users to find their way through the space based on what other users have done or are doing in that space. In exploring the idea of social navigation, she started and then led a group named Social Computing in the HUMLE-lab, in which several systems were built to illustrate and test the idea of social navigation – both for the web but also a system to be used in mobile settings. Kristina Höök has also actively been researching the field of Affective Interaction in several different projects starting 1999, mainly through user studies of systems to aid with the design cycle. The systems studies are both tangible interaction through plush toys, mobile systems using affective gestures, and others. Kristina Höök has published more than 50 scientific papers in journals such as ToCHI, IJHCS, Interactions, AI Communications, and at prestigious conferences such as CHI, DUX, DIS, IUI, and others. She has co-edited two books on Social Navigation and written a range of book chapters and popular science descriptions. She has been an invited keynote speaker at NordCHI’04, Mensch & Computer 2003, and an invited speaker at an invited session at CHI’04. She has won a top-paper award at WebNet’99, her laboratory won the SITI conference “attendants’ favourite award” in 2003 and her project “Mobile Life” won the prize in 2004. In 2005 she was granted an INGVAR II award. The INGVAR grant is handed out for the advancement of young, future research leaders in Sweden by the Strategic Research Foundation. Recently, Kristina Höök, Lars Erik Holmquist, Oskar Juhlin and Annika Waern, were granted a VINNex center named "Mobile Life" with funding for 10 years.