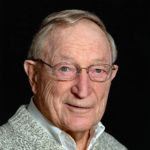 Experience
Sign in to view more
Education
Sign in to view more
Bio
Lionel Barthold is a power engineer whose technical and business work at General Electric led him to found his own power studies company, Power Technologies Incorporated (PTI). After serving six years in the merchant marine. He began in GE's cadet engineering program and worked on a variety of assignments, eventually landing in GE's Analytical Engineering group working on power industry problems. After supervising GE's Project UHV, Barthold left GE and founded PTI.

The interview begins with Barthold's early interest in radio, his work as a radio operator in the merchant marine, and his degree work at Northwestern University. Barthold then discusses his career at GE, discussing in particular his work on the EHV/UHV project and in general his background at GE in electric power systems and high voltage. He discusses how his GE work combined technical and business expertise, and how this work triggered his desire to run his own company. He then discusses the founding of PTI, PTI's development of interactive software, its strong points and its growth patterns, its growing internationalization, and its developing relationship with GE. He discusses the growing sophistication of analytical tools for systems studies and the changing needs of power industry in general. He discusses his participation in the IEEE Power Engineering Society (PES) and his desire as president of the PES to re-examine IEEE's mission. The interview concludes with Barthold's comments on the changes he has seen in the power industry and his concerns about the United States' dependence on fossil fuels.
Research Interests