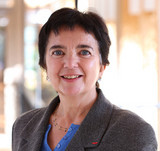 Show Academic Trajectory
Ego Network
D-Core
Research Interests
Author Statistics
Experience
Sign in to view more
Education
Sign in to view more
Bio
Monique Thonnat is french and was born in 1957. She received in 1980 a diploma of engineer ENSPM and a DEA (Master thesis) in Signal and Spatio Temporal Systems from University of Marseille . In 1982 she received her PhD degree in Optics and Signal Processing from University of Marseille III. Her PhD was prepared in the Spatial Astronomical Laboratory of CNRS. (Subject : interactive data reduction methods for astronomical plates: background restitution and radial velocity computing). She obtained her HDR from Nice Sophia Antipolis university in october 2003 (Subject: Towards Cognitive Vision: Knoweldge and Reasoning for Image Analysis and Understanding). In 1983 she joined INRIA (French National Institute for Research in Computer Science and Control) in Sophia Antipolis on French Rivierra as full time research scientist (Chargée de recherche 1ère classe ) in the PASTIS group headed by M. Berthod. She became Senior scientist (Directeur de Recherches) in 1991 then in 1995 she created the Orion project, a multi-disciplinary research team at the frontier of computer vision, knowledge-based systems, and software engineering and in 2008 she created the PULSAR research team. Monique Thonnat is author or co-author of more than 170 scientific papers published in international journals or conferences and co-author of two international patents (in 2000 on pollen recognition with 3D image and in 2008 on seismic 3D image interpretation by cognitive vision techniques). During 3 years (from 1979 to 1982) she worked on image processing techniques for astronomy in the Spatial Astronomical Laboratory of CNRS. in Marseille. Then in 1983 she moved to INRIA where she worked on pattern recognition and artificial intelligence techniques for complex object recognition (as galaxies, zoopanktons or fishes) and on computer vision for the automatic interpretation of 3D stereo data of indoor scenes or of road scenes (Prometheus). She also developed computer vision and knowledge-based systems for automating the construction of image processing systems. She has proposed to use planning and control of execution techniques (program supervision) for the reuse of programs, in particular image processing and video analysis libraries. In the last ten years she has focused her activity on realtime video analysis and video understanding (3D analysis, event and scenario recognition) and their applications to video surveillance or health and well being. Her more recent research activities concern cognitive vision techniques (ontologies for vision, learning, categorization, intelligent control,....). Monique Thonnat has supervised 24 PhD theses and is currently supervising 1 PhD thesis. She teaches computer vision and artificial intelligence in universities and in several High Engineer Schools. She is directly involved in the application of her research in the industrial domain; in particular in the framework of 8 European projects (Eureka Project PROMETHEUS, Esprit Project PASSWORDS, Esprit Project AVS-PV, Esprit Project AVS-RTPW, Climate and Environment Project ASTHMA, IST Project ADVISOR, IST Project AVITRACK) and CARETAKER. In 2005 she created in Sophia Antipolis together with other members of the Orion team, KEENEO, a start-up specialised in video surveillance in charge of the industrialization of the videosurveillance platform VSIP developed by the Orion team these last ten years. Keeneo belongs since 2011 to Digital Barriers group. In 2008 she was awarded the title of Chevalier de la Legion d'Honneur by the French ministry of research. Since 2008 she is member of the scientific board of Ecole des Ponts Paristech. From September 2009 to October 2013 she was deputy scientific director of INRIA in charge of the Perception, Cognition and Interaction area. This area has currently 44 INRIA research teams which are structured in 5 research themes: Theme1: Vision, Perception and Multimedia Understanding Theme 2: Interaction and Visualization Theme 3 : Knowledge and Data Representation and Management Theme 4: Robotics Theme 5: Audio, Speech and Language She continued her research activity within the new STARS team with a focus on research on activity recognition and applications on elderly monitoring and assistance. In particular she is directly involved in one Large-scale initiative action grouping 9 Inria teams PAL for Personally Assisted Living to develop technologies and services to improve the autonomy and quality of life for elderly and fragile persons. Monique Thonnat was the general chair of ICVS 2011 the International conference on Computer Vision Systems will be in Sophia Antipolis France She was member of the scientific advisory board of the European project Fish4Knowledge. In 2011 she was leading an activity in health and well being of the KIC EIT ICT labs and member of the scientific board of the French reference center for Health and Autonomy (CNR SdA). In November 2013 she has been appointed Director of Inria Bordeaux Sud Ouest research center.