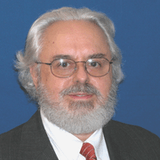 Show Academic Trajectory
Ego Network
D-Core
Research Interests
Author Statistics
Experience
Sign in to view more
Education
Sign in to view more
Bio
Phaedon Avouris received his B.Sc. in Chemistry from the Aristotle University in Greece in 1968 and his Ph.D. degree in Physical Chemistry from Michigan State University in 1974. After postdoctoral work at UCLA and AT&T Bell Labs he joined the IBM Research Division as a research staff member in 1978. He became manager of Chemical Physics in 1984.
Dr. Avouris is currently an IBM Fellow and manager of Nanoscience & Nanotechnology at the IBM T.J. Watson Research Center in Yorktown Heights, New York. During his time at IBM he has also been Adjunct Professor at Columbia University and at the University of Illinois, Urbana-Champaign.
Avouris has made many outstanding experimental and theoretical contributions to nanoscale science and technology. These contributions span a variety of subjects and have played a critical role in the progress of this field in the last 30 years. He has published about 500 papers on the atomic-scale physics and chemistry of surfaces, and the electrical, optical and opto-electronical properties and devices of carbon nanostructures. His papers have received over 50,000 citations.