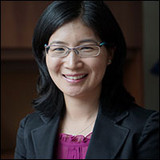 Show Academic Trajectory
Ego Network
D-Core
Research Interests
Author Statistics
Experience
Sign in to view more
Education
Sign in to view more
Bio
She is currently an Associate Professor in the Electrical Engineering and Computer Science Department at MIT. Her research interests include energy-efficient algorithms and architectures for portable multimedia applications. From September 2010 to July 2013, she was a Member of Technical Staff in the Systems and Applications R&D Center at Texas Instruments (TI), Dallas, TX, where she designed low-power algorithms and architectures for video coding. She also represented TI in the JCT-VC committee of ITU‑T and ISO/IEC standards body during the development of High Efficiency Video Coding (HEVC), which received a Primetime Emmy Engineering Award. Within the committee, she was the primary coordinator of the core experiment on coefficient scanning and coding.