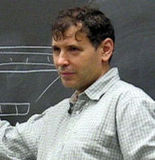 Show Academic Trajectory
Ego Network
D-Core
Research Interests
Author Statistics
Experience
Sign in to view more
Education
Sign in to view more
Bio
Mario Szegedy received his Ph.D. in computer science at the University of Chicago under the supervision of Laci Babai and Janos Simon. He held a Lady Davis Postdoctoral Fellowship at the Hebrew University, Jerusalem (1989-90), a postdoc at the University of Chicago, 1991-92, and a postdoc at Bell Laboratories (1992). He was a permanent member of Bell Labs for 7 years and for two more years of AT&T Research. He left AT&T in September 1999 to conduct research at the Institute for Advanced Study in Princeton for a year. In 2000 he joined the faculty of Rutgers University. He received the Goedel Prize twice, in 2001 for his part in the PCP Theorem and its connection to inapproximability and in 2005 for the analysis of data streams using limited memory. His research interests include complexity theory, combinatorics, combinatorial geometry and quantum computing, but he also has an interest in algebra and in programming languages. With a group of students he has founded QCteam, a quantum computing laboratory at Rutgers, which is his main project at the present time. The laboratory has received substantial funding from the university and from the National Science Foundation. It has a vigorous visitor program, and pursues collaboration with the local industry. Szegedy's research areas include computational complexity theory and quantum computing. He was awarded the Gödel Prize twice, in 2001 and 2005, for his work on probabilistically checkable proofs and on the space complexity of approximating the frequency moments in streamed data.