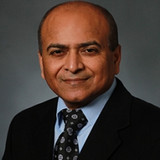 Show Academic Trajectory
Ego Network
D-Core
Research Interests
Author Statistics
Experience
Sign in to view more
Education
Sign in to view more
Bio
Honavar has received many other awards and honors during his career including the Association for Computing Machinery (ACM) Distinguished Member award for outstanding scientific contributions to computing
Dr. Vasant Honavar received his Ph.D. in 1990 from the University of Wisconsin Madison, specializing in Artificial Intelligence. Honavar is currently a Professor of Information Sciences and Technology (IST), Computer Science and Engineering, Bioinformatics and Genomics, Neuroscience and Operations Research at Pennsylvania State University. He currently holds the Edward Frymoyer Endowed Chair of IST. He is also the founding Director of the Center for Big Data Analytics and Discovery Informatics, Associate Director of the Institute for Cyberscience, Co-Director of the NIH-funded Biomedical Data Sciences PhD program, and Informatics lead (research) for the NIH-funded Clinical and Translational Sciences Institute. In 2016, Honavar was appointed as the Sudha Murty Distinguished Visiting Chair of Neurocomputing and Data Science at the Indian Institute of Science. Prior to joining Pennsylvania State University, Honavar served on the faculties of Computer Science, Bioinformatics and Computational Biology, Neuroscience, and Human-Computer Interaction at Iowa State University (1990-2013) and as a program director in the Information and Intelligent Systems Division of the National Science Foundation (NSF) (2010-2013) where he led the Big Data Science and Engineering Program and contributed to multiple other programs.