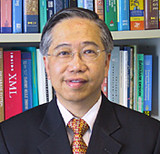 Show Academic Trajectory
Ego Network
D-Core
Research Interests
Author Statistics
Experience
Sign in to view more
Education
Sign in to view more
Bio
Professor David Wai-lok Cheung is a Professor of the Department of Computer Science. He is also Director of the Center for E-commerce Infrastructure Development (CECID). Professor Cheung graduated with a BSc in Mathematics at Chinese University of Hong Kong, and received MSc and PhD in Computer Science from Simon Fraser University in Canada in 1985 and 1988, respectively. Since joining HKU in 1994, he has been an active researcher in database, data mining and e-commerce technologies. His recent research covers secure computation of encrypted database; data interoperability theory; query on community network. He has published in many leading venues including SIGMOD, VLDB, ICDE and KDD conferences. He was the recipient of the HKU Outstanding Researcher Award in 1999, the Distinguished Contribution Award on the 2009 Pacific-AsiaKnowledge Discovery and Data Mining Conference. Other contributions to the academia include providing leadership in various prominent conferences - he was the program chairman of the 2001 and 2005 Pacific-Asia Knowledge Discovery and Data Mining Conferences (PAKDD); the conference chairman of the 2007 PAKDD Conference; the Conference Co-Chair of the 2009 ACM Conference on Information and Knowledge Management (CIKM); the program vice-chair of ICDM 2006; and the program chair of HKICC 2003. He has also served as program committee members for numerous other international conferences. Some of Professor Cheung's representative publications can be found on DBLP, Google Scholar, and CiteSeer. (A comprehensive listing of his publications is posted at the end of this page.) In applied research, under his directorship, CECID has received many prestigious grants from the Innovation and Technology Commission (ITC) of Hong Kong SAR Government, in a total amout of HK$60M, from 2001-2009. Together with his team, Prof. Cheung has developed an open-source ebXML gateway used by developers from more than 80+ countries. This open-source product received prominent awards in the Hong Kong Computer Society's (HKCS) 2004 IT Excellence Awards competition; the 2004 Asia-Pacific ICT Awards competition, and the 2005 Linux Business Awards competition. Professor Cheung has provided consultancy services to many companies. In 2003, the Information and Technology Services Department (now Office of the Government Chief Information Officer) commissioned CECID to develop the XML Schema Design and Management Guide, which is now followed by all bureaux and departments in their joined-up service projects. In public service, Prof. Cheung is currently a member of the RGC Engineering Panel as well as a board member of the Hong Kong Deposit Protection Scheme. He is also the Certification Board Chairman of the Hong Kong IT Professional Certification. He held part-time memberships at the Central Policy Unit and was a member of the Pacific Economic Cooperation Council.