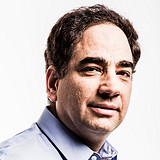 Show Academic Trajectory
Ego Network
D-Core
Research Interests
Author Statistics
Experience
Sign in to view more
Education
Sign in to view more
Bio
Ronny Kohavi is a Microsoft Technical Fellow and corporate VP of Microsoft's Analysis and Experimentation at Microsoft's Cloud and AI group. He was previously a Distinguished Engineer and Partner Architect at Bing. He joined Microsoft in 2005 and founded the Experimentation Platform team in 2006. Prior to Microsoft, he was the director of data mining and personalization at Amazon.com, and the Vice President of Business Intelligence at Blue Martini Software, which went public in 2000, and later acquired by Red Prairie. Prior to joining Blue Martini, Kohavi managed MineSet project, Silicon Graphics' award-winning product for data mining and visualization. He joined Silicon Graphics after getting a Ph.D. in Machine Learning from Stanford University, where he led the MLC++ project, the Machine Learning library in C++ used in MineSet and at Blue Martini Software. Kohavi received his BA from the Technion, Israel. He was the General Chair for KDD 2004, co-chair of KDD 99's industrial track with Jim Gray, and co-chair of the KDD Cup 2000 with Carla Brodley.