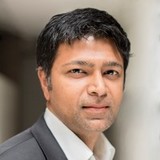 Show Academic Trajectory
Ego Network
D-Core
Research Interests
Author Statistics
Experience
Sign in to view more
Education
Sign in to view more
Bio
Subramanian is a Professor of HCI in the Computer Science Department of Bristol University where he co-directs the Interaction and Graphics Group (BIG group). Before joining Bristol, he worked as a senior scientist at Philips Research Eindhoven, Netherlands and as an Assistant Professor in the CS department at the University of Saskatchewan, Canada (2003-07). He has held adjunct positions at Manitoba, Tohoku and Chalmers Universities. He is a member of the steering committee for the ACM Tabletops and Interactive Surfaces & the ACM MobileHCI conference series. In the last 5 yrs, Subramanian has been PI on 3 and Co-I on a further 3 EPSRC funded projects. He also holds a fellowship from European Research Council through their Starting Grant scheme and has received funding from the EU for an FET-open project. His team has published more than 100 peer-reviewed articles including best papers, and honourable mentions at ACM CHI.