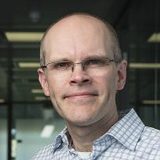 Show Academic Trajectory
Ego Network
D-Core
Research Interests
Author Statistics
Experience
Sign in to view more
Education
Sign in to view more
Bio
Steve is a fellow of the IET and a senior member of the IEEE. He has filed over 100 patents, has worked with standardisation bodies such as the BSI and ISO, and has presented his work at OECD and European Commission meetings. His research is regularly covered by the popular media including Time Magazine, Science, Scientific American, New Scientist and the BBC.

Steve is also active in the academic community. He is a visiting Professor in Digital Interaction at the School of Computing Science, Newcastle University. He is Associate Editor-in-chief of IEEE Pervasive Computing magazine. He publishes his research extensively and has received awards at many top-tier conferences including CHI, UbiComp and UIST. He has also received several awards at Maker Faire.

Steve led the SenseCam wearable camera research project from 2004 to 2010 and founded the annual SenseCam Symposium. Over 100 peer-reviewed publications from research groups around the world who have used Sensecam have been published, and there have been special issues of both the American Journal of Preventive Medicine and Memory themed on SenseCam. It has also been featured on national television and radio several times, and covered by the press on numerous occasions. The device is available to buy as the Autographer.

Prior to joining Microsoft Research, Cambridge, Steve was the Technical Director of the Cambridge Auto-ID Lab, where he helped to develop and usher in the Electronic Product Code (or EPC), an RFID-based successor to the barcode for tracking goods through supply chains. He also co-founded an RFID training and consultancy company. Before that, Steve worked as a Research Engineer at the Olivetti and Oracle Research Lab, which later became AT&T Laboratories Cambridge, where he was immersed in technologies such as VNC and the Active Bat ultrasonic indoor location system which he helped to develop. He has also worked at the Xerox Research Centre Europe at Cambridge (formerly known as EuroPARC).

Steve has a background in a broad range of computer-related technologies. His first degree is in Computer Science with Electronic Engineering, from University College London where he was awarded the Faculty of Mathematical and Physical Sciences Medal and Prize as the most distinguished student in the faculty. He subsequently received his PhD from Cambridge University Engineering Department in the area of Robotics and Computer Vision.